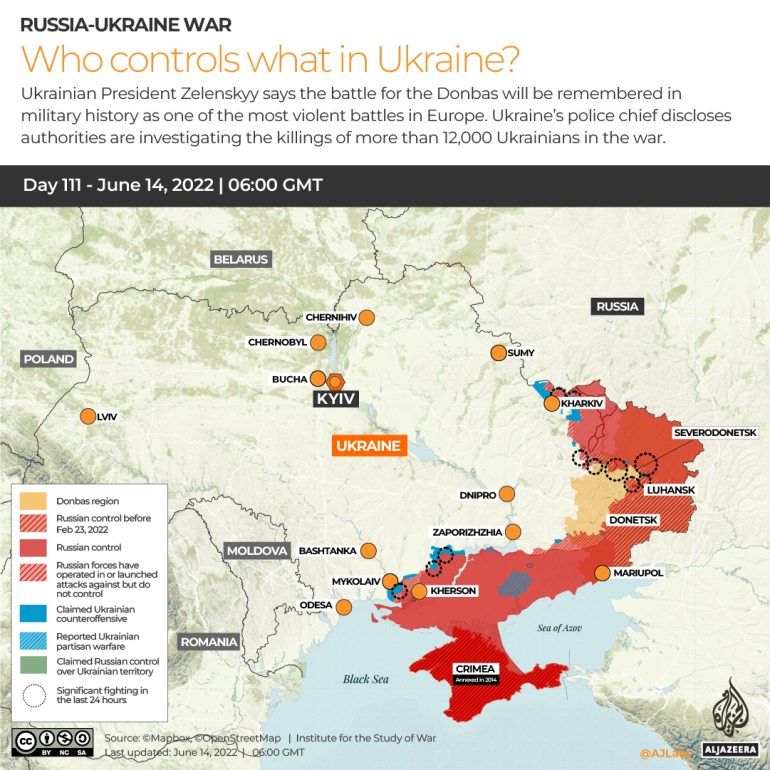 Here are the latest updates:

China should factor in the world’s response to Russia’s invasion of Ukraine as it looks to any future actions with respect to Taiwan, the US secretary of state has said.

“Unfortunately, what we’ve seen over the last 10 years is China acting more repressively at home and more aggressively abroad, to include actions that it’s taken with regard to Taiwan that are potentially dangerous and destabilising,” Antony Blinken said in an interview on PBS NewsHour on Tuesday.

“One of the things I think that China has to factor into any calculus is the response that we’ve seen to Russia’s aggression in Ukraine, and so many countries coming together to stand against that aggression, both by making sure that Ukraine had the support that it needed and also making sure that Russia paid a price for the aggression,” he added.

Blinken also said the fighting in Ukraine’s Donbas was “horrific” and has led to “terrible death” and destruction.

Dozens of defence ministers from NATO and other parts of the world are expected to discuss weapon deliveries to Ukraine on Wednesday in Brussels, the Reuters news agency reports US officials as having said.

“Russia has not given up on the fight, despite its pretty anaemic progress … What we have is this grinding, slow, incremental Russian operation,” a senior US defence official, speaking on the condition of anonymity, told Reuters.

“So the question is what do the Ukrainians need to continue the success they’ve already seen in slowing down and thwarting that Russian objective and that’ll be a major focus for the defence ministers,” the official said about the third such meeting led by United States Secretary of Defense Lloyd Austin.

The route between Ukraine’s Donbas region and the Russian-annexed territory of Crimea via the occupied regions of Mariupol, Melitopol and Kherson is now available for civilian vehicles, the Russian state-owned TASS news agency reports, citing a member of the self-proclaimed Moscow-backed administration of the Zaporizhia region.

“It’s not only for the military,” Vladimir Rogov said. “I myself have already traveled from Kherson through Melitopol to Berdyansk, Mariupol, Novoazovsk. Through Novoazovsk I went to Russia.”

“People take advantage of this, and there are many who want it, there are queues at the border, it was not designed for such an influx. But this corridor exists,” he added.

Last week, Russian Defence Minister Sergei Shoigu announced the opening of the route to Crimea from Russia’s city of Rostov-on-Don – through Ukraine’s occupied cities of Mariupol, Berdyansk and Melitopol.

Nicaragua’s Congress has renewed a decade-long decree allowing Russian forces to train in the Central American country, a decision the US criticised.

Tuesday’s decision allows 230 Russian soldiers to enter Nicaragua between July 1 and December 31 to patrol in Pacific waters with the Nicaraguan Army.

President Daniel Ortega has backed Russian President Vladimir Putin in his attack on Ukraine, and this most recent decision was expected.

Since 2012, Nicaragua’s unicameral Congress has biannually approved the entry of foreign military personnel, including Russians, into the country.

Almost 2 out of 3 Ukraine children uprooted amid war: UN

Nearly two-thirds of children in Ukraine have been uprooted during the war, according to a UN official who visited the country last week.

“The war in Ukraine is a child rights crisis,” Afshan Khan, Europe and Central Asia director for UNICEF, told a news briefing Tuesday.

Khan said 277 children in Ukraine have been killed and 456 injured, mostly due to explosives used in urban areas. She said the number of damaged schools is likely in the thousands, and only about 25 percent of schools in Ukraine are even operational.

Russia ‘ready to listen’ should UK appeal on prisoners

Russia would be ready to consider a UK appeal over the fate of two Britons sentenced to death for fighting for Ukraine, the Kremlin has said.

Kremlin Spokesperson Dmitry Peskov said neither Moscow nor the pro-Russian separatists in eastern Ukraine who passed the sentence had heard from London on the issue.

“You need to apply, of course, to the authorities of the country whose court passed the verdict, and that is not the Russian Federation,” Peskov said on Tuesday. “But, of course, everything will depend on appeals from London. And I am sure that the Russian side will be ready to listen.”

The two Britons, Aiden Aslin and Shaun Pinner, as well as a Moroccan man named Brahim Saadoun, were sentenced to death last week for allegedly fighting as mercenaries by a court in the self-proclaimed Donetsk People’s Republic. The men were given a month to appeal their sentences.

Poland’s prime minister has criticised NATO’s support so far for Ukraine, which has time and again called for more and heavier weapons.

“We have not done enough to defend Ukraine, to support Ukrainian people to defend their freedom and sovereignty. And this is why I urge you, I asked you to do much more to deliver weapon, artillery to Ukraine,” Mateusz Morawiecki said at an informal meeting of seven European NATO nations at The Hague.

“Where is our credibility if Ukraine fails? Can we imagine that Ukraine fails and we revert back to business as usual? I hope not,” he added.

NATO Secretary General Jens Stoltenberg said:  “Ukraine should have more heavy weapons, and NATO allies and partners have provided the heavy weapons now for actually a long time. But they are also stepping up.”

Europe’s top aviation safety regulator has said he is “very worried” about the safety of Western-made aircraft continuing to fly in Russia without access to spare parts and proper maintenance.

The EU and the US have moved to restrict Russia’s access to spare parts following its invasion of Ukraine.

“This is very unsafe,” Patrick Ky, executive director of the European Union Aviation Safety Agency, told reporters on the sidelines of a conference, adding that regulators do not have good data on many of the planes flying in Russia.

Russian opposition leader Alexey Navalny was abruptly transferred from a prison where he was serving his sentence to an undisclosed location on Tuesday, according to his allies.

When his lawyer arrived at Correctional Colony No 2, a prison camp in Pokrov, 119km (74 miles) east of Moscow, he was told, “There is no such convict here,” Navalny’s chief of staff Leonid Volkov said on Telegram on Tuesday.

But late in the day, the chairman of a prison monitoring commission said Navalny had been transferred to a maximum-security prison nearby.

Navalny was moved to the IK-6 prison in the village of Melekhovo in the Vladimir region, Russian news agencies reported, citing Sergei Yazhan, chairman of the regional Public Monitoring Commission. Melekhovo is about 250km (155 miles) east of Moscow.

Russian troops control about 80 percent of the fiercely contested eastern city of Severodonetsk, the governor of Luhansk has said.

Serhiy Haidai acknowledged on Tuesday that a mass evacuation of civilians from Severodonetsk now was “simply not possible” due to the relentless shelling and fighting. He said about 500 civilians were still sheltering in the Azot chemical plant.

Ukrainian forces have been pushed to the industrial outskirts of the city because of “the scorched earth method and heavy artillery the Russians are using,” he said.

“There is still an opportunity for the evacuation of the wounded, communication with the Ukrainian military and local residents,” he told The Associated Press news agency by telephone, adding that Russian soldiers had not yet completely blocked off the strategic city.

Ukrainian forces are suffering painful losses in fighting Russian troops in the eastern city of Severodonetsk and the Kharkiv region, Zelenskyy has said.

Ukraine said its forces were still trying to evacuate civilians from Severodonetsk after Russia destroyed the last bridge to the city, the latest stage in a weeks-long battle in the Donbas region that Moscow seeks to capture.

Both sides claim to have inflicted huge casualties in the fighting over the city, Russia’s principal battleground focus.

About 12,000 people remain in Severodonetsk, from a pre-war population of 100,000, according to the regional governor.

NATO must build out “even higher readiness” and strengthen its weapons capabilities along its eastern border in the wake of Russia’s invasion of Ukraine, the military alliance’s chief has said.

NATO Secretary General Jens Stoltenberg was speaking after informal talks in the Netherlands on Tuesday with Dutch Prime Minister Mark Rutte and the leaders of Denmark, Poland, Latvia, Romania, Portugal and Belgium ahead of a wider NATO summit in Madrid at the end of the month.

“In Madrid, we will agree a major strengthening of our posture,” he said. “Tonight we discussed the need for more robust and combat-ready forward presence and an even higher readiness and more pre-positioned equipment and supplies.”

Asked about Sweden and Finland’s applications to join the alliance, Stoltenberg said he was seeking “a united way forward” to resolve opposition from Turkey, which has been angered by what it deems as Swedish support of Kurdish activists.

Excellent meeting with 🇧🇪🇩🇰🇱🇻🇳🇱🇵🇱🇵🇹🇷🇴 in The Hague to prepare for a historic #NATOSummit. In Madrid, Allies will take decisions to keep NATO strong in a more competitive world. Thanks to @MinPres for hosting, to @Statsmin for co-hosting, and to all for the productive discussions. pic.twitter.com/iu6AMIKNDp

Zelenskyy has again called on the West to send his forces “more modern anti-missile systems”.

“Our country does not have it at a sufficient level yet, but it is our country in Europe that needs such weapons most right now,” Zelenskyy said, adding that Ukraine only managed to shoot down some missiles before the Lviv and Ternopil regions were hit on Tuesday.

Delay with provision of these weapons cannot be justified, he said.

Biden: Temporary silo plan to get Ukraine grain out

US President Joe Biden says he is working closely with European Union partners to build temporary silos along the Ukraine border and some in Poland to get much-needed grain out.

Biden made the announcement during a speech in Philadelphia.

Russia’s defence ministry has said it offered Ukrainian fighters sheltering in the Azot chemical plant in the eastern Ukrainian town of Severodonetsk the chance to surrender on June 15.

Russia said on Tuesday it would open a humanitarian corridor on Wednesday to allow civilians to leave the plant, and urged Ukrainian fighters to “stop their senseless resistance and lay down their arms” at the same time.

You can read all updates from Tuesday, June 14, here.