Luda Lobanova, 58, (center) cries next to her three grandchildren as they arrive to a reception center for displaced people in Zaporizhzhia, Ukraine, on May 8. Volunteer drivers are risking everything to deliver humanitarian aid to Ukrainians behind the front lines of the war — and to help many of them escape.
The Associated Press

As Russian artillery pummeled the Ukrainian port city of Mariupol in April, one family decided to flee, walking for miles with three young children in tow to a nearby village. But it was thanks to a volunteer driver who crossed the front line that they managed to eventually make it out of Russian-held territory.

“The driver, Zhenya, is a saint,” said Luda Lobanova, 58, after stepping off a minibus in the central Ukrainian city of Zaporizhzhia in early May along with 8-year-old Ihor, 7-year-old Sofia and 2 1/2-year-old Vlad. “There were so many times that they turned us around. If it wasn’t for Zhenya, we wouldn’t have made it.”

With tears in her eyes, Lobanova thanked him before he slipped away, clambering back into his minibus. He had more humanitarian aid to deliver, more people to pick up.

On the edge of the conflict zone in Ukraine, which runs along the country’s east and south, volunteer drivers are risking everything to deliver humanitarian aid to Ukrainians behind the front lines, and to get people out. The routes are dangerous and long — sometimes several days’ long — and the drivers face detention, injury or death. More than two dozen drivers have been captured, held for more than two months by Russian-backed separatists in the eastern Donetsk region, Ukrainian activists say.

A few do it for money, some drivers said, but many do it for free, either alone or in organized groups.

“I decided to do it because there are women and children there,” said Oleksandr Petrenko, who carried out several evacuations from areas in and around Mariupol before he deemed his risk of detention too great because of his repeated forays into Russian-held territory.

“I also have a mother, I have a girlfriend. These people don’t have to stay there, in that human grinder. Lives are broken there. If you don’t do it, people might die,” he said.

Joining more experienced drivers at first, Petrenko learned the routes and how to operate. He adopted a set of strict rules, which apply to drivers and passengers alike: Wipe photos and messages off mobile phones, don’t criticize Russia or Russian-backed separatists and never, ever get into political discussions — the wrong comment with the wrong people could cost you your freedom, or your life.

His first trip was the scariest. Even the weather was foreboding. “It was gray and gloomy,” he said. “It was raining. And when you enter a city of black color that burned down — it’s like a movie.”

Petrenko estimated that he managed to evacuate about 130 people from Russian-held areas before he stopped driving because of the risks.

Now he helps with logistics for a team of volunteer drivers operating out of Zaporizhzhia, the first safer major city encountered by many people fleeing Russian-held territory.

The risks are clear. Among the detained drivers is Vitaliy Sytnykov, a 34-year-old rock-climbing Mariupol taxi driver. He has been held since late March, according to one of his friends, journalist Alevtina Shvetsova, who fled Mariupol herself with her family earlier in March.

“He is a person with a big heart,” Shvetsova said, speaking in early June in the central city of Kryvyi Rih. Sytnykov had managed to get out of Mariupol but joined a group of volunteer drivers evacuating others, she said. Then, on one of his runs, he was captured. It’s not clear why.

The status of his and other drivers’ detention is unclear. Information is scarce, gleaned from others held in the same detention facility who are later released, or from limited footage that has appeared on Russian television, Shvetsova said.

“He could have stayed in a safe place with (his) family,” after he got out of the city, she said. “But … he knew there were many women, children left in Mariupol.”

Farther to the east, in the Donetsk and the neighboring Luhansk regions where Russian forces are doubling down on their offensive, volunteers’ vans and minibuses zip through towns and down country roads, racing to evacuate civilians as the fighting draws closer.

Roman Zhylenkov has been helping evacuate people from the path of the conflict since early March, just a few days after the start of the war. He started by taking people out of his now Russian-held hometown of Kreminna, then continued in the Donetsk region.

Working with the Ukrainian aid group Vostok SOS, most of those he evacuates now from towns and cities such as Bakhmut, Kramatorsk and Sloviansk are elderly or ailing.

On the back of his van, a sticker bears his organization’s logo and a hashtag: “#LeaveNoOneBehind.”

Rotary comes to aid of immigrants from Afghanistan, Ukraine 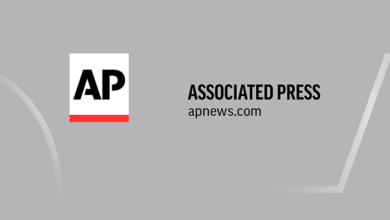