Proposals by the UK government to seize the homes of wealthy oligarchs and a push for more transparency on ownership threaten to freeze more than £1bn worth of property and hit the market for expensive houses in the capital, property experts have warned.

The measures in response to Russia’s invasion of Ukraine last week would bring the shutters down on a decades-long practice of using London property as an easy, secure and discreet place to park money, including ill-gotten gains, said Andrew Langton, chair of Aylesford International, an estate agency catering to wealthy clients.

“The severity of these sanctions are the beginning of a new world, a new market. I don’t think you can hide any more,” he said.

Property agents believe the two-pronged approach will have a wider impact by deterring the super-rich from other parts of the world, including China and the Middle East, from investing.

“If the government changes [transparency] requirements it won’t just affect Russians. It’s a pretty big assault on London if they make it very difficult for people to have a bolt-hole here,” said one agent.

The proposals to seize property would likely require legislation, and government lawyers have concerns the plans would be subject to legal challenges because they would undermine UK property rights. No final decision has been reached by ministers on whether to proceed.

UK sanctions have so far focused on a small group of oligarchs with direct links to Russian president Vladimir Putin, but more individuals are expected to be targeted.

That threat of sanctions and a souring of attitudes towards wealthy Russians have already triggered a number to look at selling up, according to several agents and lawyers who work in the London market.

The most high-profile of those is Roman Abramovich, who is not on the sanctions list. He confirmed on Wednesday that he had put west London football club Chelsea up for sale. But he has also put his £100mn-plus Kensington Palace Gardens mansion on the market, according to two people with knowledge of the deal. Abramovich declined to comment on the property sale.

Yet the ability of any super-rich Russians to sell property in the present climate is likely to be hampered as agents and lawyers have already started treating wealthy Russians cautiously since the invasion a week ago.

“You will struggle to find an agent or a lawyer to act for you if the source of your money is nefarious or in any way cloudy,” said Roarie Scarisbrick, a buying agent with Property Vision. “Sanctioned oligarchs are not going to get representation from a selling agent,” he added. 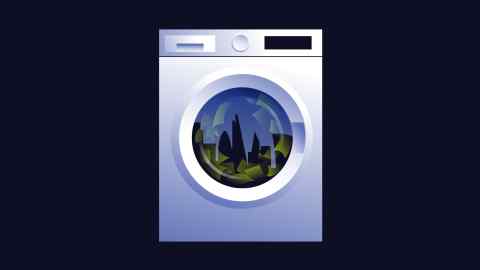 According to an analysis by Transparency International, at least £1.5bn worth of UK property, much of it in London, has been bought by Russians accused of having links to the Kremlin or corruption.

“What’s going to happen to these oligarch houses? I think they’ll just sit there gathering dust,” said Langton. “I think you’ll find those properties have no value — they are frozen,” he added.

While sanctions are likely to have a more immediate impact, the acceleration of new transparency measures in response to the invasion of Ukraine could ultimately prove more profound.

The government has fast-tracked a bill that aims to reveal the true identities of property owners who have previously used shell companies registered in tax havens, such as the British Virgin Islands, to disguise ownership.

That move marks a decisive break from an era in which anyone could invest small fortunes in London property while keeping their names off title deeds.

“If a Russian oligarch holds a property in the UK — even through a whole series of shell companies — then he is the beneficial owner of the property,” said Bill Browder, an investor and high-profile critic of the Kremlin.

If that ownership was made clear, it would make it easier for the government to freeze assets, he added.

Long called for by anti-corruption and transparency campaigners, such a register would remove one of London’s key appeals for buyers from far beyond Russia who want to keep a low profile.

Russian buyers were once the driving force at the top end of London’s market, with billionaires investing heavily in expensive neighbourhoods such as Belgravia, Knightsbridge and Highgate, and in gated estates in Surrey.

The number of property titles in England and Wales registered to individuals with a Russian correspondence address rose from fewer than 100 in 2010 to 710 in 2016, according to an analysis by the Centre for Public Data (CFPD).

But the pace of Russians snapping up property has slowed in recent years and they have been replaced by buyers from Hong Kong, China and the Middle East, who have been behind some of the biggest deals in London.

According to estate agency Knight Frank, London attracted $3bn of investment into property last year from foreign buyers — more than any other city in the world.

Much of that investment, according to the CFPD, is channelled through companies registered in Jersey, the Isle of Man or the British Virgin Islands.

Ministers’ tough new stance could change that, said Langton: “I don’t think any lawyer today will be happy to act for any overseas buyer in the UK without scrutinising every penny arriving in this country. I think those days are finished.”

What Makes the Harpoon Missile Such a Powerhouse

US to Grant $53 Million to Ukraine for Power Transmission

In Crimea people are massively get rid of real estate