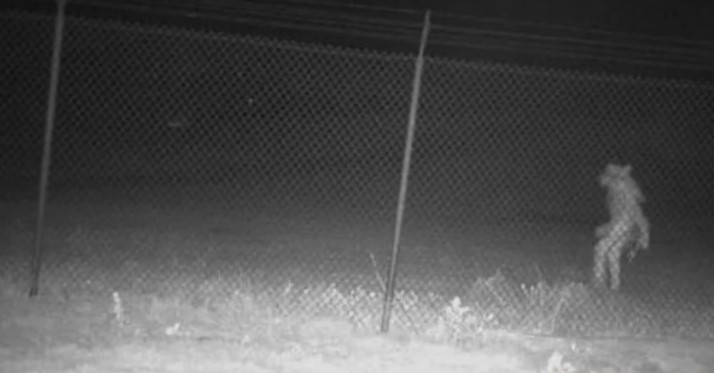 The Amarillo zoo’s security cameras captured a mysterious figure in shaggy form, prompting the city to seek assistance in identifying the creature.

The zoo’s security camera video went viral after it asked for help identifying the figure on Twitter.

Last week, the city of Amarillo released a photo of a shaggy figure lurking outside the Amarillo Zoo’s perimeter fence in the dark.

After the photo was taken at 1:25 a.m. on May 21, a motion-activated camera alerted zoo officials. The Amarillo Zoo captured a strange image outside the zoo in the dark and early morning hours, the city of Amarillo tweeted on June 9.

The tweeter account speculated that it could be a chupacabra or someone wearing a strange hat who likes to walk around at night. The creature is later labeled as an Unidentified Amarillo Object on the account (UAO).

A Chupacabra is a monstrous creature from Latin American folklore that attacks animals and consumes their blood. The name is a combination of the Spanish words chupar (“to suck”) and cabra (“goat”), and it means “goat-sucker.”

The object’s silhouette is unrecognizable, though what appears to be two long legs support it from beneath. The government speculated that the creature could be a large coyote on its hind legs, or even a Chupacabra, in a light-hearted statement.

Chupacabras were first reported in Puerto Rico in 1995, where they were accused of attacking goats, sheep, and other domestic animals and leaving uneaten carcasses drained of blood. Early reports described them as a large reptilian kangaroo-like creatures that stood upright.

The first reports of a chupacabra can be traced back to a single eyewitness, a Puerto Rican woman named Madelyne Tolentino, whose sighting served as the foundation for all subsequent reports of the creature. She described the chupacabra as a bipedal creature with long limbs, dark eyes, and spikes down its back.

The video captured by the camera has sparked a heated debate on the internet.

Sonic the Hedgehog, Bigfoot, and a jumping coyote are among the strange, silly, and serious theories.

Following the viral videos from the Amarillo Zoo, the San Antonio Zoo in Texas released footage of a mysterious figure and asked the public for help identifying the strange creature.

A mysterious figure was spotted wandering Brackenridge Park on zoo security cameras, according to the zoo’s official Instagram page. The zoo then requested public assistance in identifying this strange creature.

The City of Amarillo asked its Twitter followers for help tagging this mysterious creature on Wednesday. Many users took the city’s tweet literally, while others questioned the image’s authenticity.