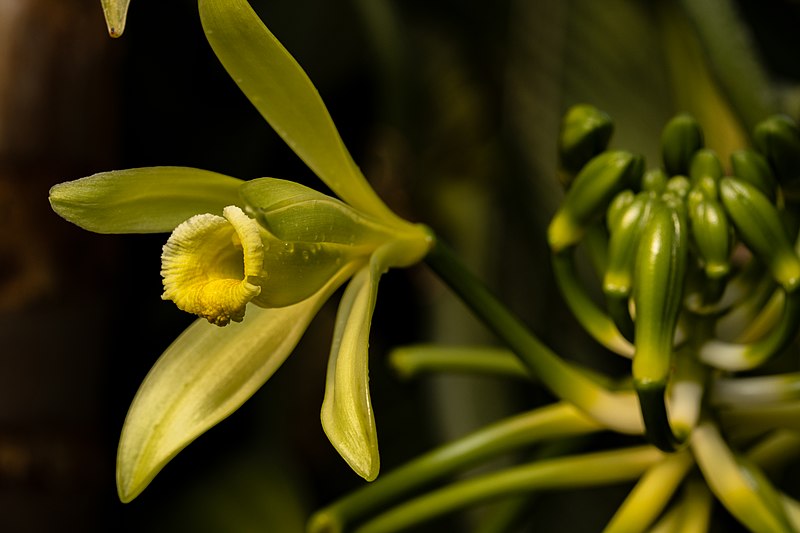 Although better known as the land of baobabs, the tropical island in the Indian Ocean, Madagascar, is also home to 1000 orchids, 90% of which are endemic and can only be found on the island.

Orchids are known for the beautiful flowers it bears, earning the title of Queen of Flowers.

The pollinia, two sticky pollen pockets that get stuck on insects, are the defining factor of most Madagascar orchids from other flowers. The orchids are pollinated by various insects, and sometimes frogs, using the pollinia in each blossom.

Vanilla and Galeola are the only genera of Malagasy orchid that grow like climbing plants on the island. Seven variants of vanilla plants can be found on the island, including spice vanilla (Vanilla planifolia), which grows particularly well in Madagascar.

Sambava is the city known as the capital of vanilla as most of the vanilla plantations are found northeast of the island.

In Madagascar, vanilla is considered an aphrodisiac.

Madagascar harbors several saprophytic orchids, which do not have leaves, making it unable to produce chlorophyll. It then depends on mycorrhizae, a type of fungi found on its roots, for the necessary nutrients. Didymoplexis, Auxopus, Eulophia, Gastrodia, and the species Habenaria saprophytica belong in this group.

In 2020, Gastrodia agnicellus, an orchid with a fleshy stem and tiny, brownish flowers, was discovered in Ranomafana National Park. It was later known as the “ugliest orchid in the world.”

Growth All Around the Island

As there are 1000 orchids in Madagascar, the flora can be found on various types of surfaces. Some grow on the ground, tuber types grow under the ground, some on rice fields, and others thrive on inselbergs, highlands, ravines, and between savannas.

Terrestrial orchids or those that grow directly on the ground have thick fleshy rhizomes and are often mistaken for succulents. Although these types of orchids have small flowers, the leaves are eye-catching. Examples include Goodyera, Cheirostylis, Platylepis, and Zeuxine.

On the other hand, there are also ground orchids that have hard and dry rhizomes, some examples include Calanthe, Malaxis, Nervilia, and Eulophia.

Terminal flowers are those with inflorescences that are closed and bear flowers at the uppermost part of the stem, which includes the genera Liparis, Polystachia, Oberonia, and Agrostophyllum.

On the contrary, The genera Bulbophyllum, Graphorkis, Grammangis, Eulophiella, Paralophia, and Cymbidiella have open inflorescences and have pseudobulbs where nutrition is stored.

In December and January, during the most intense rainy season, the “pink orchid,” Eulophiella roempleriana, blooms from the leaf axils of certain screw palms on the island of Nosy Nato, east coast of Madagascar.

From December to March, the black orchid, Cymbidiella falcigera, grows and blooms from raphia palms in the Akanin’ny Nofy reserve.

Read also: Orchid Believed to be Extinct for a Century, Found by Community Scientists

In the southwest area of the island, where there are spiny and dry forests, blooms one of the rarest orchid species, Grammangis spectabilis. Locals believe seeing even a single blossom to be a sign of good luck.

Malagasy genera Microcoelia, Aeranthes, Pectinariella, and Cryptopus have closed inflorescences but have no pseudobulbs. Some grow epiphytically, on plants and trees; others grow litophytically, on rocks and stones. An example is the Microcoelia aphylla, a species that does not bear true leaves. Its highly developed roots provide photosynthesis.

Aerangis, Aeranthes, and Angraecum all have a back lip that extends to form a thin tube called a spur. This is where the flower’s nectar is found. The famous Darwin’s Orchid, Angraecum sesquipedale, has the world’s longest spur, up to 45 cm long. The only insect is a small moth with a long proboscis that allows it to reach the sweet nectar. Several orchids from the three genera emit a sweet odor at night. In Madagascar, they are known as hanitriniala, which translates to “perfume of the forest.”

The orchid Erasanthe Henrici Isaloensis is also noteworthy. It is critically endangered, with only a few dozen plants remaining. It blooms only in March in the Isalo National Park’s gorges.

WHO delivers 20 ambulances to Ukraine - Ukraine