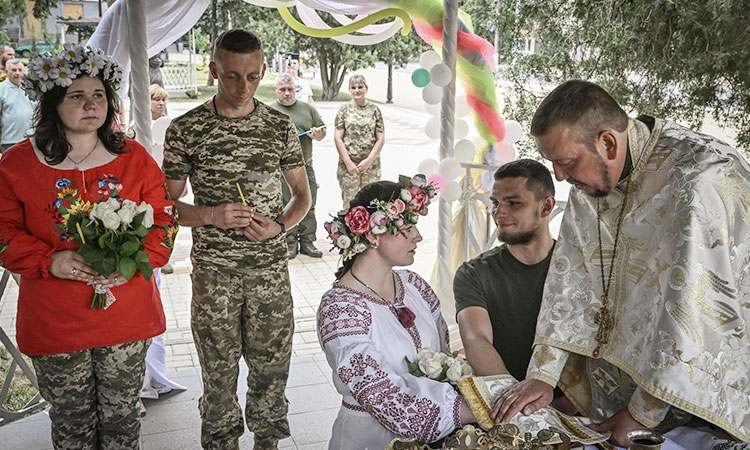 Ukrainian soldiers Kristina (3rd R) and Vitalii Orlich and Khrystyna Lyuta (L) with Volodymyr Mykhalchuk get married in the city of Druzhkivka on Friday. AFP

Air raid sirens wailed and one of the brides wore camouflage trousers as the Ukrainian army took a break from frontline fighting in the east to hold a double wedding on Sunday.

Two young couples who met just months earlier while serving in the army tied the knot together on Sunday in the small town of Druzhkivka, 40 kilometres from frontline zones where Ukrainian forces are battling Russian invaders.

The sun shone and soldiers carried bouquets in a brief interlude from heavy fighting as Russians intensify efforts to push out Kiev’s forces in the east.

One of the brides, Khrystyna Lyuta, a 23-year-old contract soldier with the rank of private first class, wore camouflage trousers and army boots with a traditional red Ukrainian blouse embroidered with flowers. “I’ve got used to this uniform,” she explained of her choice of outfit. 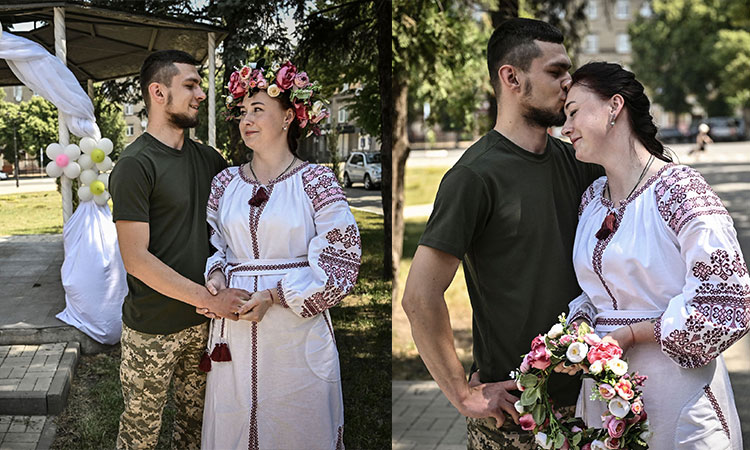 Kristina (L) and Vitalii Orlich get married in the city of Druzhkivka. AFP

She met her husband Volodymyr Mykhalchuk, 28, just two months ago, when he was mobilised. They live around five kilometres from each other in the same southwestern Vinnytska region but might never have met if it had not been for the war. “War is war, but life goes on,” Lyuta explained their decision to marry. “This was not a hasty decision,” said Volodymyr. “The main thing is that we love each other and we want to be together.”

The other bride, Kristina, 23, who works in the signals corps, opted for a traditional long white dress with red folk embroidery to marry Vitaliy Orlich, also 23, a sniper. “I believe that this is about creating a new family — it doesn’t matter where it happens or how,” she said.

The grooms both wore soldiers’ uniforms. The couples were set to return to serve in the war zone on the same day.

“I can’t give them free days as such. The only thing is that they won’t be on the frontline, they will stay in the rear,” the brigade’s commander Oleksandr Okhrimenko told AFP.

Neither couple had family present but they said relatives had been understanding. Kristina said that her husband had spoken to her mother online and “she already calls him a son.” 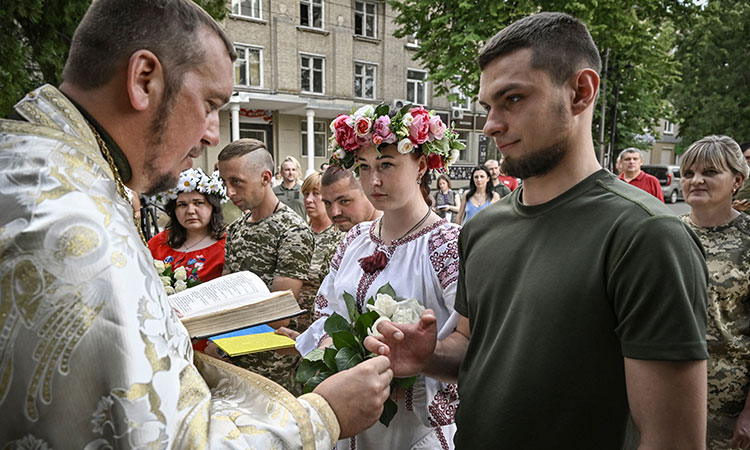 Kristina (2nd R) and Vitalii Orlich and Khrystyna Lyuta (L), with Volodymyr Mykhalchuk get married in the city of Druzhkivka. AFP

The soldiers were from the 14th Separate Mechanised Brigade, which has been fighting Russian-backed forces in Donbas since May.

The young couples married in front of a registry office, which had closed due to the war. The quiet street had few cars and occasional trams. Sandbags were piled up in front of cafe and shop windows.

The couples went through traditional rituals such as stepping together onto an embroidered towel, symbolising togetherness.

The brigade’s chaplain gave them an Orthodox Christian blessing, flicking holy water and placing crowns on their heads, on the day of a major Church holiday, the Festival of the Holy Trinity.

The Priest in a khaki cassock, Yuriy Zdebskiy, told AFP that “it’s the first marriage in the brigade in wartime,” since Russia launched its invasion on Feb.24. “Now it’s wartime and there’s no time for big celebrations,” he said.

The infantry brigade’s commander, Okhrimenko, has the right to certify marriages under martial law. He said the location for the weddings “was chosen primarily for security reasons.”

Druzhkivka is about 40 kilometres as the crow flies from three fronts, as Russian troop threaten the towns of Sloviansk to the northeast, Bakhmut to the east and Gorlivka to the southeast.

Even in relatively untouched Druzhkivka, shelling earlier this month tore apart private houses and crashed through the roof of a Baptist church in one street.

None of those attending reacted. Many war-hardened locals now ignore warnings to go to shelters unless there is an obvious threat.

We already have 2,606 affirmative answers as to whether Ukraine needs modern missile defense systems

‘On Ukraine, India on the side of peace’: Jaishankar at UN | Latest News India