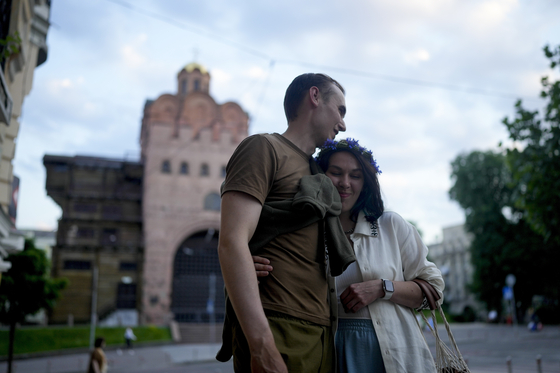 Stand-up comics Serhiy Lipko and Anastasia Zukhvala embrace during an interview with the Associated Press on their wedding day in Kyiv, Ukraine, on Saturday, June 11. Lipko and Zukhvala are among those using humor as a weapon, and to keep spirits up. But he’ll soon have a real weapon in his hands, because he’s going into battle. [AP]


Because he’ll shortly be deployed as a soldier on the battlefields of Ukraine, Serhiy Lipko and Anastasia Zukhvala chose to marry first, like a growing number of couples being torn asunder by war with Russia.

Like others, their nuptials were rushed and smaller than they would have been during peacetime, with just a few dozen close friends and family. She wore a simple crown of blue flowers in her hair. And then, because laughter can be medicinal and because Lipko was building a career as a comic before the defense of his country called, they headed to a stand-up comedy club in Ukraine’s capital, Kyiv.

There, with his new wife watching from the wings, he took the stage in olive-green fatigues and soon had the crowd in stitches with close-to-the-bone humor about army and married life. He joked that military training with NATO instructors had been a great opportunity for him to practice his English, and how nervous he’d been about handling expensive military gear, for fear of breaking it.

The war isn’t remotely funny, but Ukrainians are learning to laugh about the awfulness of it all. Not necessarily because they want to, but because they have to — to stay sane in the brutality that has killed tens of thousands of people, is upending Ukraine, millions of lives and the world order as it rages on front lines in the east and south of the country.

Russian President Vladimir Putin and his troops, especially dead and wounded ones, are favorite targets of dark Ukrainian wartime humor. But there are red lines: Ukrainian dead aren’t laughed about and the grimmest battles, among them the brutal siege of Mariupol and the port city’s Azovstal steelworks, are far too raw for jokes. The same is true of atrocities in Bucha and elsewhere.

“Tragedies cannot and will never be the object of humor,” said Zukhvala, who also works as a stand-up comic, as she and Lipko hugged with the tenderness of newlyweds after his show and scooped up armfuls of bouquets, wondering aloud how they’d find space for them at home.

“This is an absolutely crazy time, beyond ordinary experience,” she said. “Our life now is made of paradoxes, and it can even be funny.”
Ukraine’s most famous comedian is Volodymyr Zelensky, now the country’s president, elected in 2019. In the TV comedy series “Servant of the People,” the former stand-up comic and actor played a lovable high school teacher who accidentally becomes president — before he later actually became one for real. But Zelensky hasn’t had much cause for comedy since the Feb. 24 invasion thrust him into the role of wartime leader. His daily video addresses to the nation are often grim and forceful.

But while he works to rally international support and soldiers fight with tanks, artillery and tons of Western-supplied armaments, Ukrainians away from the front are using jokes and humor as weapons — against war-time anxiety and moroseness, against Russia and to feel as one, both laughing and crying together in their sorrow and anger.

Yuliia Shytko, 29, said she felt in far higher spirits after chortling loudly with the rest of the crowd through Lipko and other comedians’ routines in the basement comedy club, the vast majority of their jokes revolving around war-related themes.

“Laughing and stuff, that’s how you cope,” Shytko said.

Lipko and Zelensky crossed paths in comedy before war utterly altered their trajectories. The future president, then still an entertainer, was a juror in 2016 on the TV game show, “Make a comedian laugh.” Lipko was a contestant. He wore camouflage fatigues because he was in the midst of military service and rattled off jokes about his army experiences. He made Zelensky laugh by quipping that he’d buy a PlayStation if he won the top prize — which he eventually did. They spoke in Russian then; they both stick to Ukrainian in public now.

Lipko is still riffing off army life, even as he prepares within days to leave behind his bride to fight. The army gave him a day off to tie the knot, a quick in-and-out of a marriage office where their comedian friends ruffled the registrar’s feathers by joking around.

“We laughed a lot,” said stand-up comic Anton Tymoshenko, who attended and also performed later that night at the club.

Lipko’s nickname in the army is “the comedian.” During his routine, he joked that some things his fellow soldiers say and do are so funny he can’t help but use them as fodder for his stand-up, despite having told them he wouldn’t. Afterward, he said his comic outlook should help him endure in battle.

“I am a comedian who temporarily became a serviceman,” he said. “I have plans and creative projects for after the war. There are things to live for.”

Zukhvala said she tells herself that “we will win and everything will be fine.” She wants a big wedding celebration when peace returns.

Tymoshenko said he and their other comedian friends will look after her while Lipko is away.

But he has worries of his own: He has been trying to persuade his parents to leave their village in the south that he feels is too close to the Russian advance, but to his dismay they’re laughing off the danger. His mother quipped that should Russian missiles churn up her potato plot, that would spare her the spade work.

“My mother never joked before the war,” he said. “They use my weapons against me … and that’s unfair.”

Angelina Jolie in Ukraine for a mission| Disaster in Ukraine| #shorts, #angelinajolie