This story was last updated at UTC/GMT

“It is clear that Ukraine needs additional weapons for its defense,” Scholz said, adding that Germany has supplied Ukraine with arms since the start of the invasion.

“In this critical phase we are considerably expanding our support: we will supply Ukraine with a state-of-the-art anti-aircraft system and an artillery detection radar, among other things,” the chancellor went on to say.

Scholz said that the arms would be supplied in coordination with European and NATO partners. He added that it was important that Germany and its allies defend “every square inch of NATO territory,” and that Berlin would increase its presence on NATO’s eastern flank.

Earlier, Ukrainian President Volodymyr Zelenskyy criticized Scholz and German officials in an interview with the ZDF broadcaster, and urged Berlin not to prioritize its relations with Russia over Ukraine’s defense.

“We need from Chancellor Scholz the certainty that Germany supports Ukraine,” he said. “He and his government must decide: there can’t be a trade-off between Ukraine and relations with Russia.”

Yuri Sak, an advisor for Ukraine’s defense minister, told DW that “Donbas is not lost. The fighting continues.”

“It is very intense fighting. It is very dynamic fighting. And of course, we are outnumbered.”

Sak said that Russian forces have “superiority when it comes to heavy artillery.”

“They are literally barraging the cities and villages of Luhansk region as well as Donetsk region with a view to destroy them,” he added.

Sak said that the “only thing we need now actually is more heavy weaponry from our international partners.”

“If we receive it on time, there will be less suffering.”

“Had we received it before, there would have been less suffering of civilians as well, because we would be able to repel the Russian aggressor more efficiently,” Sak went on to say.

Sak argued that Ukraine needs more heavy weaponry because the ratio of shelling is “absolutely disproportionate” and that Russian forces fire “around 50,000 rounds a day.”

Kremlin spokesman Dmitry Peskov was quoted by Russia’s RIA state news agency as saying that Moscow’s main goal was the protection of the self-proclaimed “people’s republics” in the Donetsk and Luhansk regions that make up Ukraine’s eastern Donbas.

“In general, the protection of the republics is the main goal of the special military operation,” Peskov said.

Donetsk separatist leader Denis Pushilin said that there had been increased fighting and shelling in the region, adding that all necessary forces will be involved to counter Kyiv. 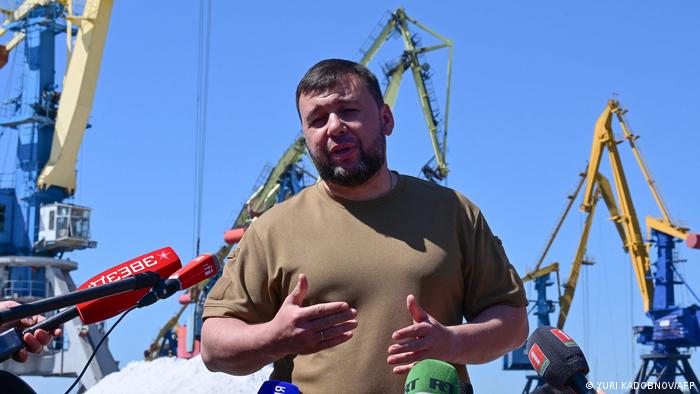 Russia’s claims about increased shelling in the Donetsk region could not be independently verified.

What happened in Russia’s invasion of Ukraine on Monday

Finnish President Sauli Niinisto said that according to the latest intelligence, both Russia and Ukraine were using heavier weapons than before in the most recent stages of the war.

Amnesty International accused Russia of war crimes in the northeastern Ukrainian city in Kharkiv. The organization said that attacks in Kharkiv killed hundreds of civilians.

You can revisit our updates from Friday, June 11, here.

Women of Ukraine are showing their strength

Russian mines in Ukraine: ′The threat is pervasive′ | Europe | News and current affairs from around the continent | DW