KYIV, Ukraine (AFP) — The European Commission will provide a clear signal next week on Ukraine’s EU candidate status bid, its chief Ursula von der Leyen has said, as fighting rages in the east and south of the country.

Making a surprise visit to Kyiv on Saturday, von der Leyen said talks she held with Ukrainian President Volodymyr Zelensky “will enable us to finalize our assessment by the end of next week” — the first time the bloc has publicly given a sense of timing.

Zelensky has pressed for rapid admission into the EU to reduce Ukraine’s geopolitical vulnerability, which was brutally exposed by Russia’s February 24 invasion. But officials and leaders in the bloc caution that, even with candidacy status, EU membership could take years or even decades.

Von der Leyen, appearing alongside Zelensky during her second visit to Kyiv since the war began, made no promises, noting further reforms were needed. The Ukrainian president warned it was a “decisive time” for his country and the EU.

“Russia wants to ruin European unity, wants to leave Europe divided and wants to leave it weak. The entirety of Europe is a target for Russia. Ukraine is only the first stage in this aggression,” he said.

Despite reservations among some member states, EU leaders are expected to approve Ukraine’s candidate status at a summit on June 23-24, though with strict conditions attached. 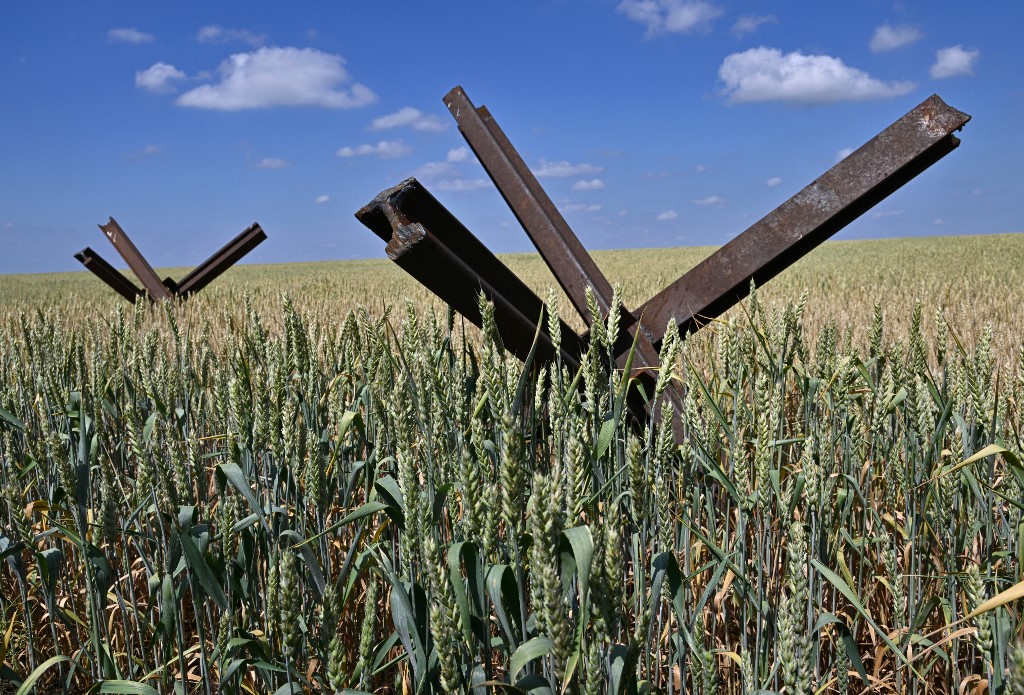 A photograph shows anti-tank obstacles on a wheat field at a farm in southern Ukraine’s Mykolaiv region, on June 11, 2022, amid the Russian invasion of Ukraine. (Genya Savilov/AFP)

He warned of “an acute and severe food crisis and famine,” adding that the “shortage of foodstuffs will inexorably lead to political chaos” — all of it “the direct consequence of the acts of the Russian state.”

Before the war, Russia and Ukraine produced 30 percent of the global wheat supply, but grain is stuck in Ukraine’s ports and Western sanctions have disrupted exports from Russia.

At the summit, Zelensky urged international pressure to end the blockade, speaking to delegates including Chinese defense minister Wei Fenghe, who on Sunday reiterated Beijing’s position on the crisis.

“On the Ukrainian crisis, China has never provided any material support to Russia,” he said, adding they supported peace negotiations and hoped “NATO will have talks with Russia.” 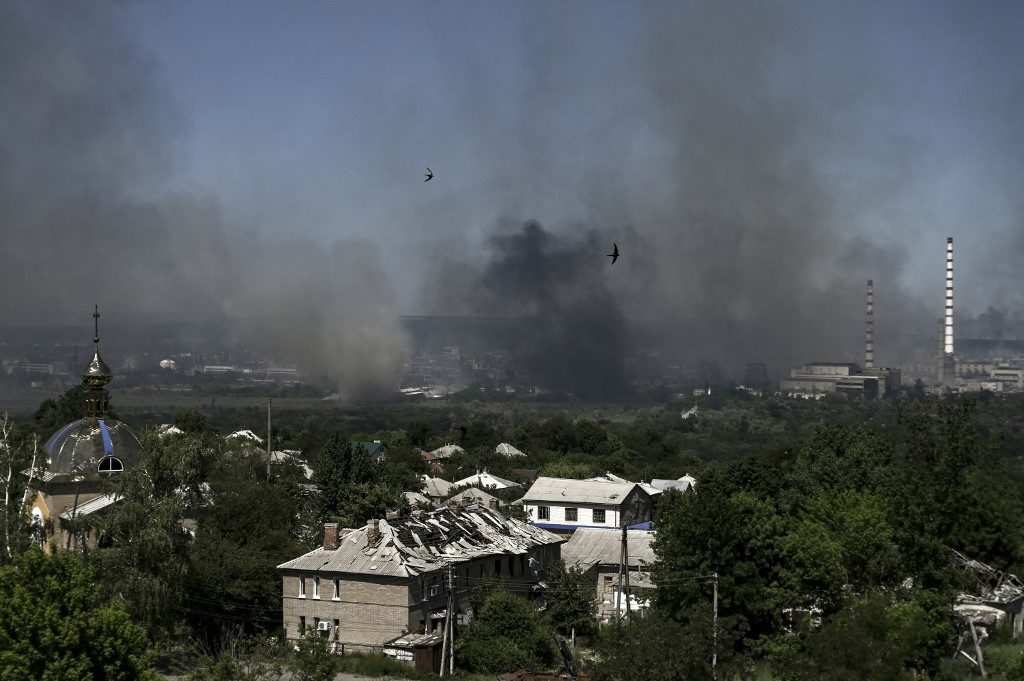 A damaged building is pictured in Lysychansk as black smoke and dirt rise from the nearby city of Severodonetsk during battle between Russian and Ukrainian troops in the eastern Ukraine region of Donbas on June 9, 2022. (Aris Messinis/AFP)

Ukraine’s Western allies have warned China, which has yet to condemn Russia’s invasion, against offering any form of support for Moscow.

Since withdrawing from Kyiv, Russian forces have concentrated their firepower on the eastern Donbas region and the south. Two civilian deaths and 11 injuries were reported Saturday in locations across Donetsk, the regional governor said.

“All major cities in the free territory” of Donetsk “have been without electricity” since Saturday evening, according to the area’s military administration. Moscow has particularly focused on the key industrial city of Severodonetsk, in Lugansk, which Gaiday said Saturday was “ruined” by Russian forces.

Gaiday said later on television that Ukrainian fighters in Severodonetsk were winning street battles, but that Russian artillery would then destroy the buildings those fighters were using for cover — “story by story.” Gaiday said the number of civilian victims would be “enormous and terrible.”

In Odessa, a man died after coming into contact with an explosive object while swimming at a beach with his wife and son, the regional Ukrainian command said. Visiting beaches there is currently banned due to the risks of mines.

The city of Chortkiv in the country’s west was shelled Saturday, regional governor Volodymyr Trush said on Telegram, while his counterpart in the Mykolaiv region in the south, governor Vitaliy Kim, stressed the urgent need for international military assistance. 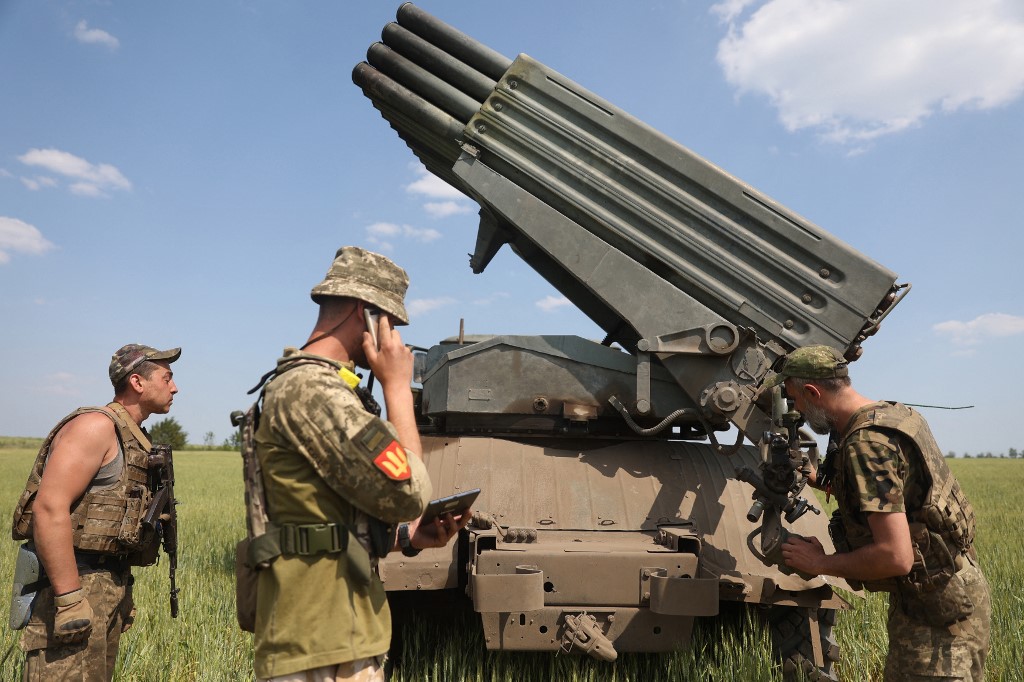 “Russia’s army is more powerful, they have a lot of artillery and ammo… and we are out of ammo,” he said.

On Sunday, the southern command said the Ukrainian Air Force had destroyed ammunition depots and equipment in three air strikes in the last 24 hours, without indicating their locations.

“In order to discourage our troops, the enemy is shelling our positions and trying to win the battle of artillery fire,” the command’s statement said.

For residents in Mykolaiv, every day brings a brush with death. Igor Karputov, 31, recalled how his neighborhood was hit last week, shaking his apartment, and how he helped a bleeding man to an ambulance.

“Then I went to another place which had been hit, where emergency services were already taking care of someone,” he told AFP. “But they were dead. And the one I had helped died in an ambulance.”

In areas now controlled by its forces, Moscow has sought to impose its authority. Officials in the occupied southern city of Kherson handed out Russian passports to residents for the first time on Saturday, news agencies reported.

Russia’s TASS agency said 23 Kherson residents received a Russian passport at a ceremony through a “simplified procedure” allowed by a decree from President Vladimir Putin.

Last month, Russian authorities introduced the ruble in the Kherson region as an official currency alongside the Ukrainian hryvnia.

Food vs fuel: Ukraine war increases scrutiny on use of crops for energy

Razom for Ukraine Brings Together Community Leaders from Ukrainian Organizations and Partners from Ethnic, Religious and Human Rights Groups to Host Press Conference in Front of the White House

Zelenskiy decree rules out Ukraine talks with Putin as ‘impossible’