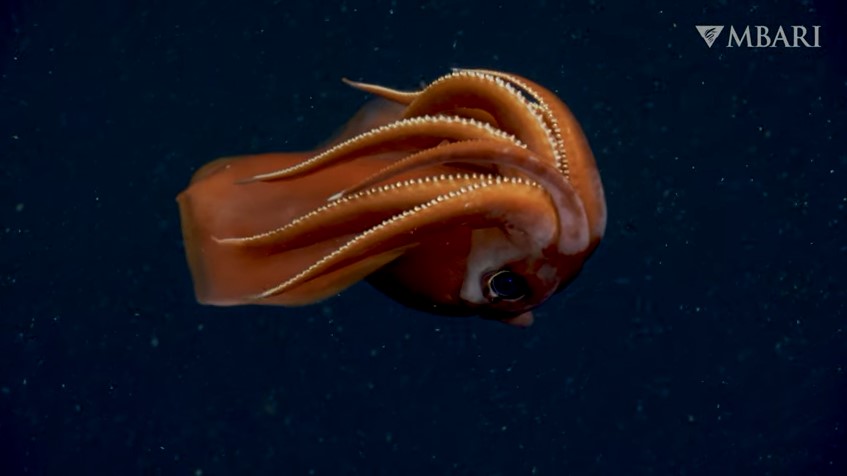 Two decades ago, MBARI installed a 1080i camera on its ROVs. In late 2021, the institute replaced its aged 1080i camera with an upgraded camera system that has the ability to capture 4K UHD, four times the resolution of Full HD video at 3840 x 2160 pixels.

Over the last few months, MBARI has been sharing some of the footage that has been captured with its new camera system. In celebration of World Ocean Day, the institute shared a new eight-minute video, which is the longest clip it has shared since the installation of the upgraded camera.

The video continues to show the eastern Pacific black ghost shark, a giant siphonophore, a deep-sea skate, a giant larvacean, and a slime star. It also shows clips of an angler shrimp, a basket star, a scallop comb jelly, a blob sculpin, and a swordtail squid. A few minutes into the video and a sea anemone with pom-pom anemone is shown, followed by a bloody-belly comb jelly, pink bamboo coral, an octopus squid, a long spine thornyhead, oven mitt comb jelly, and a vermilion crab on bubblegum coral. The video concludes by showcasing a snow globe jelly, a fingered goblet sponge, and finally a vampire squid.

One of the reasons MBARI posts so many videos of fascinating marine creatures on its YouTube channel is to pique viewers’ interest in marine life, in the hopes that this will motivate people to take part in the conservation of aquatic life.

For MBARI, the ocean and its inhabitants face a rising tide of threats which include overfishing, pollution, and climate change. The institute is working to understand this incredible habitat and how animals there will navigate these changes. MBARI added that the ocean needs help and that all life on earth depends on a healthy ocean, PetaPixel reports.

MBARI has established plans and efforts to protect the ocean and slow the impacts of climate change. The institute believes in the need to take action on two fronts, which include cutting net carbon dioxide emissions to zero by 2050 and increasing ocean health by reducing pollution, overfishing, and safeguarding critical marine and coastal habitats.

For the latter front, MBARI’s technical achievements and knowledge are transforming climate change research with novel methods and technologies. Several MBARI research projects were designed to tackle issues related to climate change, as well as to understand how marine life reacts to a changing ocean.

Will The U.S. Face A Food Shortage?