Temperatures have risen over most of the southwestern United States this week, leaving locals sweating as daily record highs are threatened, notably in California’s Death Valley, where temperatures might reach 120 degrees.

According to AccuWeather, the scorching heat will last into the weekend, but much-needed respite is on the way. 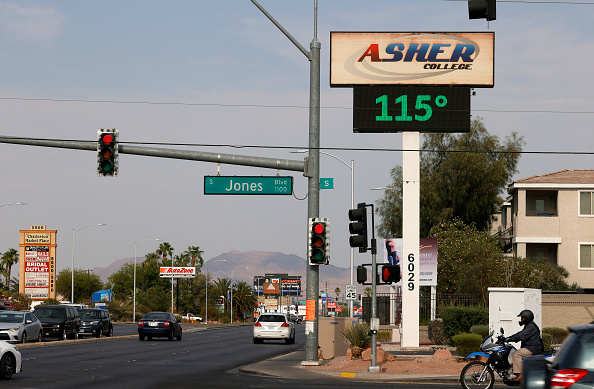 This week, a northward bulge in the jet stream formed over the Southwest, allowing air more characteristic of the middle of summer to spread across the region.

On Wednesday, Phoenix recorded its first 110-degree reading of the year, as the Valley of the Sun baked in July-like temperatures.

This milestone is usually reached by the city around June 13.

For the second consecutive day, Las Vegas saw its hottest temperature of the year, reaching 109 degrees Fahrenheit on Friday, beating the daily record of 108 degrees set in 1996.

On Thursday, the city had its hottest temperature of the year, reaching 108 degrees.

High temperatures in Sin City typically reach the upper 90s in early June, so the two days’ measurements were an astonishing 10 degrees above average.

A heat advisory was in force for much of South Central California and western Nevada until Saturday. Temperatures in the Los Angeles region might reach 102 degrees, while the San Joaquin Valley could reach 106 degrees.

Temperatures were expected to peak near 100 degrees on Friday, according to the Weather Service in Reno, Nevada, and the potentially record-breaking highs were extremely early in the summer season.

Reno doesn’t regularly reach 100 degrees until about July 10, according to meteorologists. Areas of Utah and New Mexico, as well as a region of South Texas, were also under the advisory, with temperatures expected to range between 100 and 105 degrees on Friday.

The National Oceanic and Atmospheric Administration stated last month that above-normal temperatures were predicted in virtually all of the lower 48 states in June, July, and August, with the exception of small pockets in the Pacific Northwest and Northern Plains, as per The New York Times.

In contrast to the high heat, the agency forecasted below-average precipitation across the West, which is currently suffering from a severe drought.

According to weather forecasters, this is the very first heat event of the summer period, and several people have not yet adapted to the heat, making them more vulnerable than usual to high temperatures.

Forecasters noted that now was a good time to check on the condition of cooling systems. They also advised residents to stay in air-conditioned apartments and to never leave children or pets alone in automobiles.

While the heat index is commonly used to offer a more precise assessment of how hot it is outdoors, meteorologists also use it to determine how much heat the human body can withstand.

According to the Weather Service, heat exhaustion symptoms include dizziness, thirst, and excessive perspiration.

Heat stroke symptoms include disorientation and unconsciousness, in which case contact 911 and transport the sufferer to a cooler environment.

The Russian army hit the shopping mall in Kharkiv! Russian troops with missiles